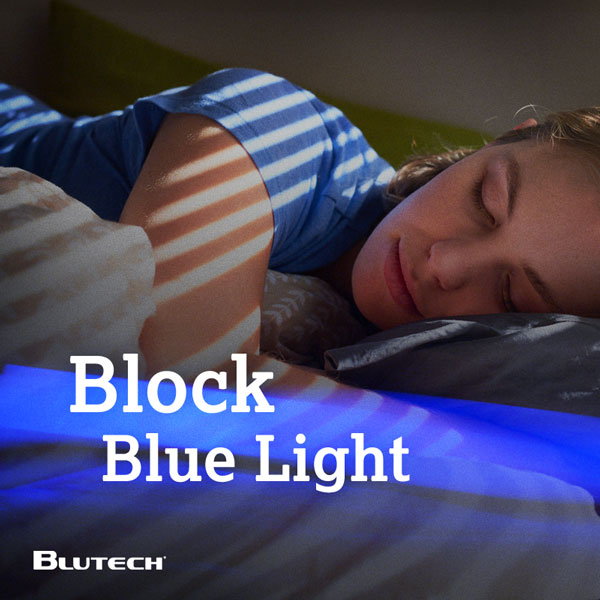 What are BluTech Lenses?

BluTech lenses protect against the harmful blue light found in all digital devices and even the sun. BluTech lenses are classified as blue light blocking lenses. The benefits of having BluTech lenses involve reduced eye strain, front and back reflectance, and improved visual performance.

Ages between 10-38 years old are categorized as “screen addict”, which means the majority of this age group consume the most time viewing smartphones, laptop/computer screens, and tablets. Out of 7.47 billion people in the world, 66% of the world have cell phones. Two and a half billion people, which is 34% of the entire world’s population, are social media users and are spending hours each day on their cell phones.

Would you categorize yourself as a “screen addict”?

Symptoms of digital eye strain consist of fluctuating vision, headaches, body and eye fatigue, dry eyes, poor night vision, light sensitivity or decreased concentration. It is important to discuss with your eye care provider about your digital device usage and the amount of screen time you are defined to.

I categorize myself as a screen addict. I am constantly on my iPhone checking up on all social media networks. At work and school, I am constantly looking at a computer screen. The advancement in technology has reduced my use of paper, which is great for the environment, but terrible for my eyes.

Now, what is Blue Light and where does it play a role in my life?

Blue light is difficult to avoid because it is a part of our everyday lives. Technology is advancing every year, where now everything we do is on the computer or cell phone. Any excessive amount of screen time is harmful because of the blue light. Especially at night, using your phone before bed is one of the worst remedies to help fall asleep.

Blue light causes receptors in our retina, which is found in the back of the eye and holds cells that are sensitive to light and help form a visible image, to inhibit the release of melatonin. Melatonin is the hormone that helps regulate the sleep and wakefulness cycle. Using a smart device before bed will decrease the release of melatonin and cause an irregular sleeping pattern. Devices such as smartphone, computers and TV’s have energy-efficient light which are keeping our bodies up at night

How to Refrain from Blue Light?

So the best way to avoid blue light is to just not look at a screen right? Maybe go outside, get some fresh air and give your eyes a rest from screen time. Many patients are unaware that the sun contains the most damaging blue light rays as well. The most efficient way to avoid the harmful effects of blue light rays is the wear BluTech lenses lenses all the time. These lenses are slightly tinted, which help absorb the harmful blue rays to prevent reaching the back of the retina.

The sun holds most of the destructive blue light rays. This is where the blue light polarized sunglasses come into play and you have the best of both worlds. These lenses assist to give you outstanding protection against the glare and the noxious rays from the sun.

Personally, I wear glasses all the time. I have two pairs of eyeglasses, one with transitions and one without. My transitions pair I wear during my long days at work because I am on the computer most of my day. I feel less eye strain and fatigue at the end of the day compared to when I wear my non-transition pair of glasses. Even though my transition pair does not give me a full 100% protection for the blue light, it is still a great lens option that allows me to benefit from less eye strain and fatigue.

Briana Rodriguez, Optometric Technician and Future Optometry Student for the Class of 2022

Dog Eat Your Glasses? Our WOW Guarantee Has You Covered!

Protect Your Vision and Fight Macular Degeneration with MacuHealth!